So, What Makes Chicago Style Pizza So Special? 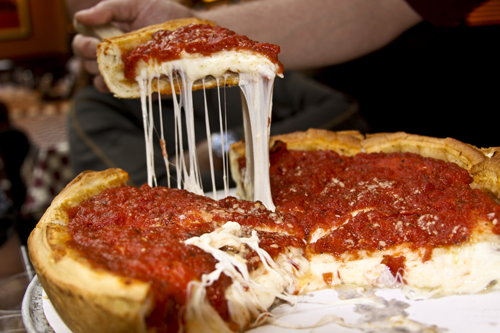 What Exactly is Chicago Style Pizza?

Since Chicago is one of the biggest cities in the United States, it should come as no surprise to learn that Chicago style pizza can actually refer to more than one kind of the delicious, over-cooked dish. However, most references of Chicago style pizza are made in relation to something called deep dish pizza, which is exactly what it sounds like.

In short, deep dish pizza is cooked in a round container that resembles a pie pan more than the classic pizza pan, which is extremely appropriate because deep dish pizza resembles a pie more than its classic counterparts. Furthermore, the interior of the pan is covered with cooking oil because its shape makes it a challenge to remove its contents, thus resulting in the slightly fried crust that characterizes the dish. Although different pizzerias make their deep dish pizzas with different thicknesses for the crust, the most traditional among them make it with somewhere between thin and middling thickness, which combines with the frying to ensure a sensational crunchiness with each bite of the crust.

Finally, it is interesting to note that deep dish pizza tends to have its toppings piled onto it in the opposite order from its classic counterparts. For example, it uses cheese, meat, vegetables, and then sauce rather than sauce, vegetables, meat, and then cheese. This is because deep dish pizza takes longer to cook because of its thickness, meaning that many of the toppings are at a risk of being burned with such long cooking times. As a result, most of the toppings go at the bottom, while the sauce is slathered on top to keep them protected from the heat of the oven.

Who Came Up with Chicago Style Pizza?

Regardless of who came up with the deep dish pizza, it proved to be a hit, perhaps because its characteristic shape set it apart from competitors who were just becoming popular in Chicago at the time. Soon after, other Chicago pizzerias began offering their own take on the dish, though disputes continue to the present day about which of them is using the real, original recipe.

If reading this has made you hungry, please come and visit us for a taste. After all, there is nothing like first-hand experience when it comes to learning about new things, though in this case, it might be more appropriate to call it first-bite experience.